Speaking Japanese with a translator

Since the March 11, 2011 earthquake and tsunami in Japan our family has been recalling the time we spent in Japan during our 2003 trip.
The memories of our trip had been tucked away but now with the disaster they are becoming vivid again.  Although Sweet Pea was with us on that trip, she was just a wee thing and so, her memories aren’t as detailed as ours.
We have been retelling our stories of hospitality, beauty and efficiency of a great country.  Our hearts break at the photos of destruction and loss of life there.
So, Sweet Pea and Gypsy Boy have been hearing story after story of Japan.

One day Sweet Pea said, “Do you and Daddy speak Japanese?”
We said, “We don’t.”
Sweet Pea said, “So how did you eat, if you couldn’t speak to them?”
So, we told Sweet Pea how we managed in a country only being able to say hello, and yes.
We told her how we would point to pictures or plastic models of food to get what we wanted.

Eight years later technology has grown so fast in its usefulness for travel that a trip to Japan now would be much different. 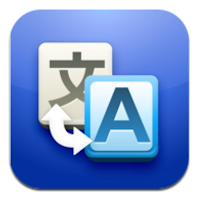 We would say, “We used Daddy’s Google Translator on his iPhone 4G”

We have been having fun around the house playing with the  speak-and-translate feature, but I think this application may be revolutionary in the way we travel.  Now with 15 spoken languages translated into more than 50 languages, we simply choose a language (Japanese in this case) speak English into the mic and we receive the translation in audio form and written form.  Pretty useful.

Will Google Translator and others like it replace the need to learn new languages?